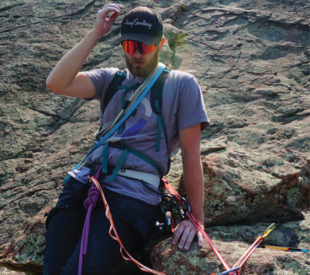 Devin is from Cape Cod Massachusetts, and moved to North Carolina in 2021 with his girlfriend Paige and his two cats, Crash and Toothless. He started climbing indoors at a small gym in MA in 2017. His interests outside of climbing are cars, skiing, and cooking.

Devin also owns a small apparel company called “Always Something Apparel,” which is an outdoor lifestyle brand. Talk to Devin for any of your retail questions at Cliff Hangers! 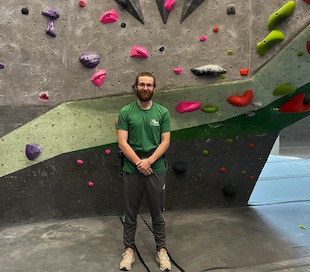 Scott is our head instructor and competitive Team Coach. Climbing on and off for over 10 years, he says he’d prefer a relaxed day in Linville Gorge over crimping hard on boulders any day. When he's not at the gym, you can find him looking for the best Thia spot or cheering on his favorite football club, Manchester United. If you have any questions about climbing or classes, Scott’s your guy. 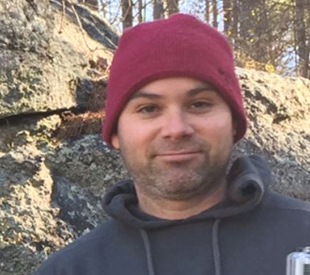 Kris first stepped into a rock climbing gym in 2007. Years of travel and consistent adventure gave Kris an understanding and a hunger, which ultimately led to the decision that bringing a climbing gym to the area would be rewarding. After visiting numerous gyms and crags in the USA with his brother, Cliff Hangers took hold.

Prior to Cliff Hangers, Kris worked as director of admin for Action Express Racing, and tried his hand at teaching high school and audio engineering. Spare time activities include making music, art, and carpentry projects.

Keith Johnson fell in love with rock climbing back in 2009 and has been climbing ever since. Years of being avidly involved in counter-culture sports, rock climbing was the obvious evolutionary next step on his list. Once he and his brother conceived Cliff Hangers, they set their sights on building their climbing gym in the Lake Norman area from the ground up, to deliver a completely original and groundbreaking experience.

Prior to launching Cliff Hangers, Keith was a crew chief for action express racing, a Daytona prototype sports car race team. With a lengthy career in racing, he came to a fork in the road and decided to take a path less traveled.

When he’s not at Cliff Hangers or climbing some of his favorite spots in the southeast you may find him wake surfing, wake boarding, and spending time with his family. He is the proud father of one new little climber. Keep an eye out for his future little crusher!

Casey was born and raised in Mooresville, North Carolina and studies communications at Appalachian State University.

She has been climbing since 2019. Her interests are dogs, working out, and hanging out with friends and family. Talk to Casey for any of your Marketing and Youth Program Questions at Cliff Hangers!

Paige is from Massachusetts and moved to North Carolina in 2021 with her boyfriend Devin and their two cats, Crash and Toothless. She started climbing for fun indoors at a small gym in MA in 2017. Paige’s interests outside of climbing are traveling, cooking, baking and spending time relaxing!